My basic belief is that supposing the weather runs in perfect cycles (ending exactly at the temperatures at which each cycle begins) is just as foolish as assuming that the planets orbit in perfect circles (instead of imperfect ellipses) just because perfect circles (and temperature cycles) are mathematically idyllic. Anybody analyzing the weather taking into account the possibility of ‘elliptical’ drift? Apparently not.

Sunspot cycles, Earth’s ever changing orbit, the wobbling angle of Earth’s axis, periodic earthquakes flexing Earth’s equatorial tectonics like a centrifugal governor (affecting the length of each day, as well as the power generated in the magnetosphere), the moon slowly drifting away (which will weaken the tides and lessen the sudden temperature-drops during solar eclipses), the continual evolution of breathing species, etc, etc, etc…. Too many factors WELL out of mankind’s control; even if our daily use of technology could have some effect on the weather, those other factors well dwarf us—–they could just as easily counteract our effect as augment it. But in the proper political realm it still sounds like nobody is even investigating those additional factors—–because the conclusion was foregone before any experiments were even done.

Isn’t the trick to having wisdom first in gaining a sense of how much you don’t know? 🤔

Lack of wisdom is why people panic….

And, unless it isn’t widely known yet, Human Evolutionists believe that rapid climate change six million years ago or whenever was what drove our rising species to become so comparatively intelligent and adaptable to variable environments in the first place. 🤔

In other words, don’t fear change——ride the wave, because change makes you stronger. 😎🍹 (Panic is for people with diminished capacity to adapt…..)

Personally, I get my most credible climate news directly from my own garden.

Last week, my plants told me I should NEVER pick a whole crop of pomegranates all at once…. Very short shelf-life. 😔 LOL 😅

Many thanks to the unknown source of this meme: 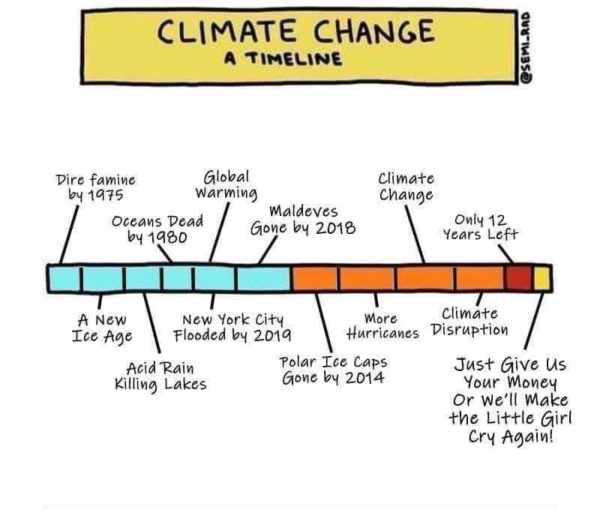