My Definition of Steampunk 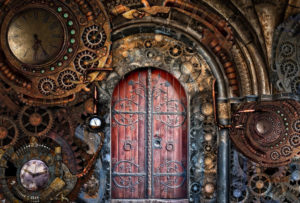 Because someone told me that it was impossible to define, that,
“Steampunk is everything, everything is Steampunk.”
(Actually the president of the biggest Steampunk club in my city.)

Steampunk is a sub-genre of science-fiction distinguished from all other science-fiction by its prevalent Victorian-era (1837–1901 AD) aesthetics whether in art, music, fashion, technology, or literature. Its defining characteristic is the steam engine, which gave way to the steam locomotive and its revolutionary railway system. A secondary characteristic is air-travel by balloon, or “airship”.

Within Steampunk itself are two more, widely recognized sub-genres: “Post-Apocalyptic”, which is usually set in the future and depicts mankind as having experienced a setback to 19th century technology; and “A Future That Never Was”, which is most often set in the past and is based on what Victorian contemporaries envisioned for the 20th-century. A third, and highly debated, sub-genre of Steampunk is Historical Purism; it’s still science-fiction, but it ejects the wilder “punk” elements in favor of retaining a truly authentic Victorian flavor.

Some people who attempt to define “Steampunk” and struggle may fall to insisting that “Steampunk is everything, everything is Steampunk,” due to this genre’s immense versatility. However this does a serious injustice to the many other great subcultures of the world. For instance, “Cybergoth” kind of looks like Steampunk, but it’s obviously different enough that Cybergoth is best described as Cybergoth. You don’t have to lump them together under an umbrella term in order for them both to be cool.

As a final note: Steampunk, though heavily influenced by European industrialism, is not to be confused with Euroboo-ism. A Euroboo, or sufferer of Euroboo-ism, is a person who wasn’t born European, but rejects the culture and country of their birth because they hold a deep personal belief that all things European are superior. The genre of Steampunk can be localized to anywhere in the world at the artist’s whim, no allegiance to Europe necessary because it’s the science-fiction element that’s important. For instance, “The Wild, Wild West”.

Dieselpunk is a sub-genre of science-fiction distinguished from all other science-fiction by its predominant art-deco, “Great War”, and World War II era (1914–1945 AD) aesthetics whether depicted in art, music, fashion, technology, or literature. Its defining characteristic is the internal combustion engine, which gave way to a society based on automobiles and airplanes.

Cyberpunk is a sub-genre of science-fiction distinguished from all other science-fiction by its sense of humankind’s exorbitant reliance on computers, to the extent that our daily environments and even sometimes our bodies have been overrun or replaced by them. Its defining characteristic is advanced digital technology, such as the Internet, the robot, artificial intelligence, computer viruses, and the true hologram.