Dieselpunk is a sub-genre (branch) of Science-Fiction distinguished from all other science-fiction by its predominant art-deco, "Great War", Gread Depression, and World War II era (1914–1945 AD) aesthetics whether depicted in art, music, fashion, technology, or literature. Its defining characteristic is the internal combustion engine, which gave way to a society based on automobiles and airplanes.

Dieselpunk often gets confused with Steampunk by people who either don't know History, to whom "old-fashioned" is but a uniform blurr in sepia tone, or perhapse have just never heard of this other term. It doesn't get nearly as much attention, maybe because Dieselpunk movies get lost in the tummult of less fictional "War Movies". Like Steampunk, though, Dieselpunk is absolutely all about the Science-Fiction element, NOT the violence element. It's just that themes of violence tend to arise in Dieselpunk because wars dominated that era in real life.

Rosie the Riveter, a character created during WWII to inspire women to apply for hard labor jobs in industrial manufacturing, because America's military needed all of the equipment it could get, is literally Dieselpunk's poster child. 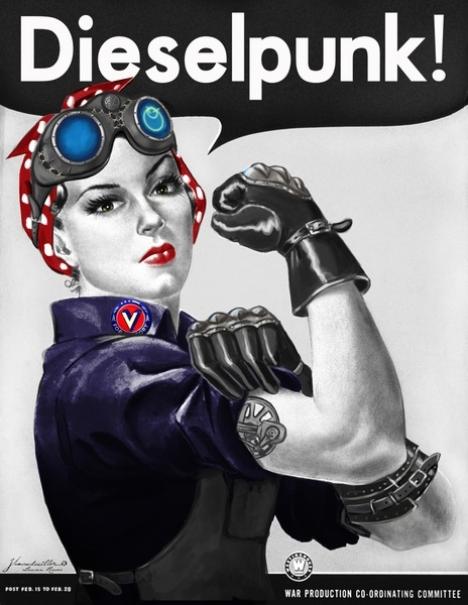 Aspects of Dieselpunk NOT inspired by war include Film Noir, the dismally romantic mystery films of the silver screen, Classic Animation, and the nightclub scene of the 1930s and 40s.